Ever since its initial release in 1949, George Orwell’s 1984 has been drawing attention for its dense themes and subtle jabs at censorship, surveillance, and “Stalinism” even to present day. For those unfamiliar with Orwell’s dystopian novel, it tells the story of Winston Smith, a man who goes against the grain by refusing to conform to his dictatorial, oppressive society. However, he find that freedom comes with a cost, one that he may not be able to cover. This story is abundant with themes such as conformity versus individuality and censorship. Throughout its life as a published novel, 1984′s cover has had quite a few drastic makeovers for its U.S. readers due to its pertinent topics. 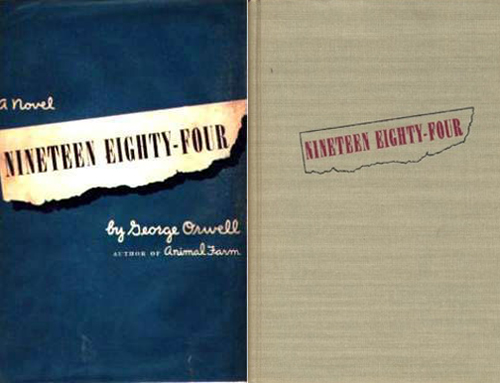 The above picture is the very first cover that 1984 received for its publishing debut within the United States in 1949. Contrary to many of the “typical” covers that come up when searching for this novel, the cover features a torn piece of paper with the title on it over a dark blue wash. This is a very simplistic cover, yet it leaves much to the imagination. The fact that the very top of the paper is all that is left, we are left imagining just what else is on the missing portion of the page. This gets at the very heart of the novel’s theme, censorship. By not allowing us to see what was to come next, the publishers are playing along and “censoring” us from a potentially important part of the book. This seems like a very powerful cover that clearly delivers the story’s main theme. However, this cover doesn’t last for too long…

The second cover issued for a U.S. release paints a much different picture for its literary audience. This cover shows much more of the actual content of the book, painting a specific picture of Orwell’s dystopian society from the very beginning of the reader’s journey through this story. We see our presumed main character in the center of the cover, a poster of Big Brother, the central “antagonist” of the story to the top right and the phrase “War is Peace, Freedom is Slavery, Ignorance is Strength” engraved on a building to the top left. The artists of this book seem to want to more blatantly capture some of the more physically recurring themes within the book, but doesn’t quite scream “censorship” like the previous cover. 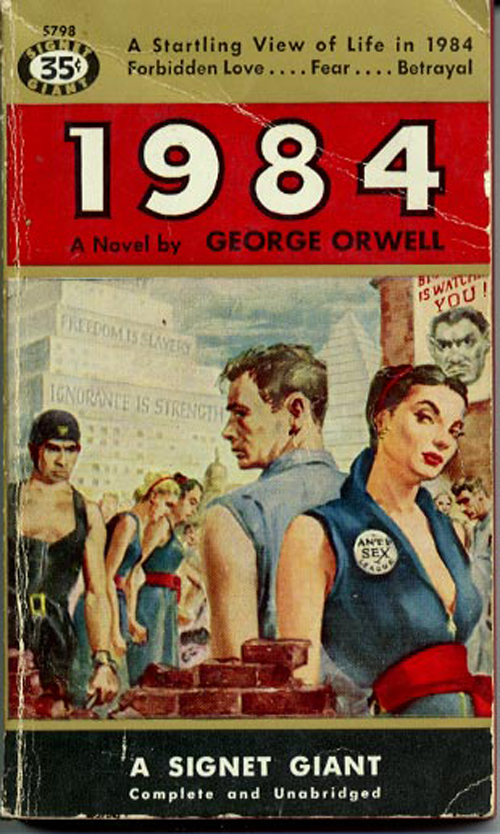 This cover, published by Signet in 1954, shows much more of a cinematic view of the novel. This cover fits right in with a great deal of American movie posters of the same time period. 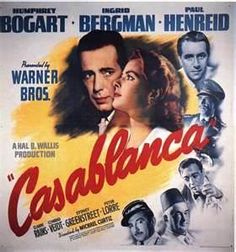 These covers both show the main characters front and center, with the obstacles and other recurring characters outlined on the side. Instead of censorship and surveillance, all of a sudden 1984 is about “A startling view of life in 1984, forbidden love….fear….betrayal.” The top of the novel’s cover has that very same tagline, changing the complete tone of the text to match with the popularity of American movies of the time. After all, 1954 WAS the year that America’s sweetheart Marilyn Monroe married baseball star Joe Dimaggio. 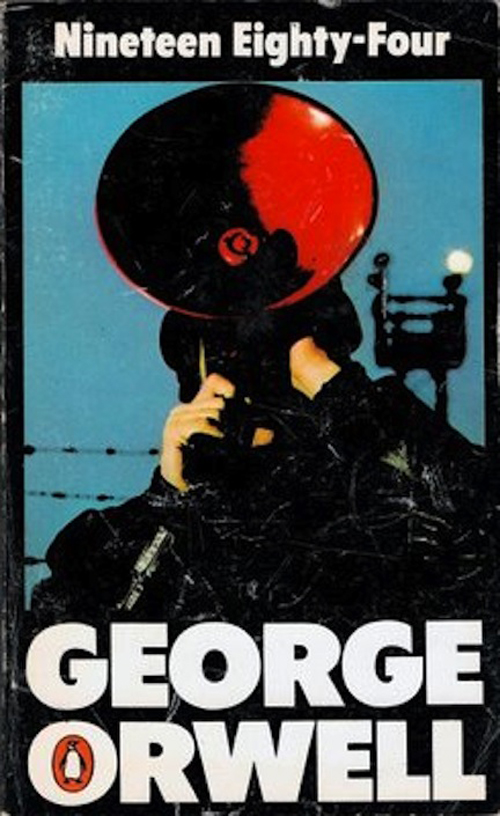 The third major change to the book’s cover, which debuted in 1978, came at a very coincidental time. Here we see a man, his face in shadow, dressing completely in black and holding a large megaphone, presumably giving orders or instructions. In the background, we see a barbed wire fence as well as a guard tower with a light shining into the yard where the man is standing. This portrays a MUCH different tone than the previous covers before it. The idea of this man within a fence in military camp giving out orders is much more sinister than a piece of scrap paper or a movie poster. Here we see the first ideas of a military institution come into play. This comes only 3 years after the U.S. backed out of the Vietnam war. The ideas of POW camps and war-time tactics were still ingrained into a large portion of the U.S. population. Therefore, the publishers of this book may have believed that by employing the use of these ideas on the cover of this book, it would generate more reader interest from a large group of American citizens. This is also the first time that we see the actual written form “Nineteen Eighty-Four”. This seems to place a greater emphasis on the actual date, and not just the numbers that make up the said date. Overall, this seems to be the first realistic and viscera book cover within the chain.

Below is the fourth and one of the final major changes to Orwell’s novel cover within the U.S. Produced at the beginning of the age of “alternative media”. With the implementation of the internet and world wide web, alternative media quickly exploded into popularity. However, with this popularity came the increasing need to monitor what was happening within the web. This became the start of online “policing”. Therefore, many different groups of people using the internet were under a much larger scope of surveillance. Those using the internet were views silently from the deep space within the web, and the events, people, and ideas shared through this revolutionary service found themselves receiving a greater deal of coverage than before. This eye of cyber-globalization may be reflected in the cover below. 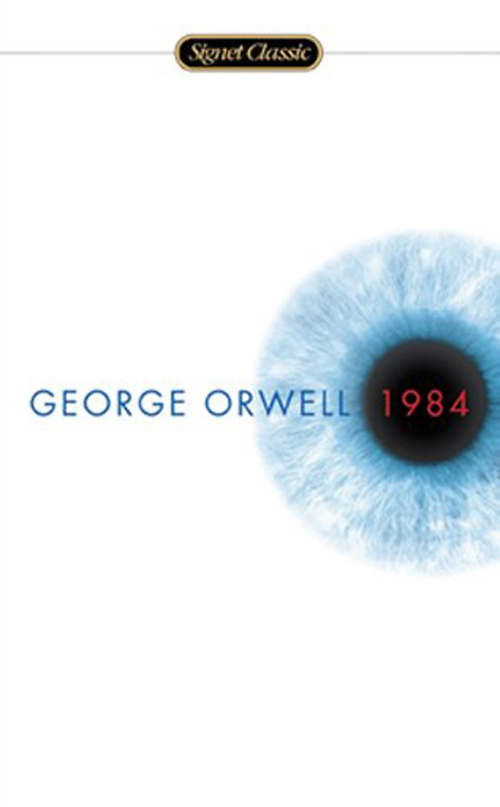 This cover of Orwell’s 1984 debuted in the early 1990’s, and once again returns to the simplicity of the novel. Here, we see the title of the book in the center of a deep blue eye, peering wide open at the audience. Surrounding it is a void of white. This very simplistic cover hits home at the idea of watching and surveillance. The deep blue eyes and phrase “Big Brother is always watching” is presented to the audience before they even know the theme itself. The white void plays with the theme of censorship. We are presented with just the eye of someone. We don’t know anything else about that person. The shape of their nose, their jaw-line; All of their facial features aren’t revealed to us. The censoring of this eye’s owner highlights the very eerie theme within this novel, as points to the possible idea of online surveillance.. With this cover, we never really know who is watching us…creepy… 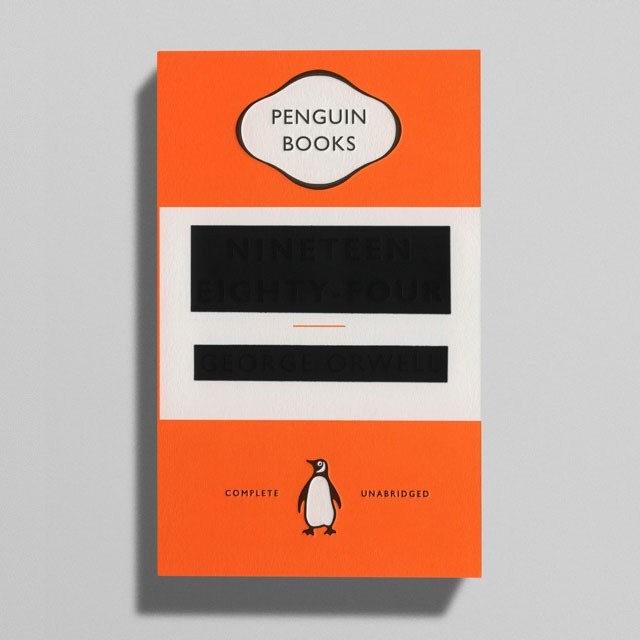 This newly re-imagined cover for 1984 first came to the United Kingdom in 2013 as part of a series of re-imaginings of popular books. Although this cover didn’t particularly start in America, it is my personal favorite. If we squint, we are able to make out the title and author of the book. However, at first glance, all you see are large black bars of censorship. This is an incredibly interesting concept, as the cover immediately gets to the heart of the theme at work within Orwell’s novel. There is nothing else on the cover besides a stripe of white within a block of orange. Orange is consistently related to prison, as a great deal of the inmates are forced to wear this color. The stripe of white acts as the background of a page. Therefore, we are treated to an incredibly poignant cover that plays with the ideas of censorship, while also giving a sense of lawbreaking. The bright color orange, combined with the large black bars pull the reader’s attention right to the book. It also generates an air of mystery, as to interest the readers to find out exactly why this censorship is taking place. 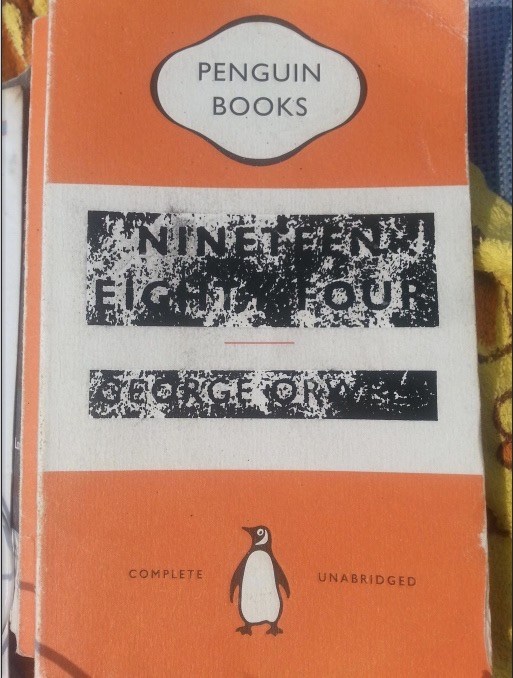 A fun fact about these covers is after so much “wear and tear”, the black bars actually begin to deteriorate, revealing the title and author! This is definitely playing at the idea that consistent use of certain ideas and themes leads to the uncovering and un-censoring of otherwise “taboo” topics. Overall, the American covers of Orwell’s 1984 highlight the need to comply with the shifting popularity or important topics of the time period in American history. It is not until the 1990’s that we see a return to the themes and motifs of the novel itself, instead of playing at the fears, concerns, and popular opinions of American citizens.

Check out Flavorwire.com‘s article for the complete chronological list of 1984 book covers from all over the world!

This project was created by David MacNeill for a class at PSU that examines literary taboos.